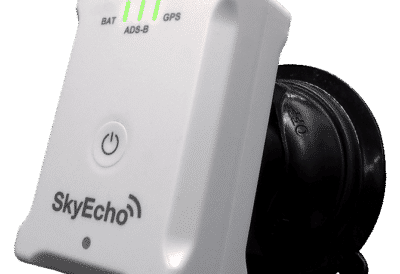 uAvionix Corporation today announced that its SkyEcho Electronic Conspicuity (EC) devices will shortly be cleared by the UK Civil Aviation Authority (CAA) to transmit ADS-B data on 1090MHz, when carried in an aircraft also operating a 1090MHz transponder, including Modes A, C, and S. The clearance will be publicised in an Air Information Circular (AIC) to be released on 19 December 2019.

SkyEcho  is an approved EC device under the CAA’s CAP 1391.  CAP 1391 was produced as a result of a CAA led project to develop a new industry standard for low-cost devices for use on light aircraft, to make them conspicuous to other airspace users. Sky Echo 2 is a standalone, battery powered EC device, one of a limited number of such devices that fully meets the standard set by CAP 1391.

Aircraft transponders worldwide operate on the International Civil Aviation Organization (ICAO) standard frequency of 1090 MHz. For the widest compatibility this is also the frequency employed by the SkyEchoEC for ADS-B reception and transmission. Sharing the 1090 MHz frequency with transponder systems required the UK CAA and NATS to undertake a series of tests on 1090 MHz based EC systems. This was to ensure that there would be no negative impact from operating the two technologies simultaneously in the same aircraft.  Until that testing was complete there has, therefore, been a prohibition on 1090 MHz based EC devices transmitting their ADS-B data simultaneously with an operating transponder.

With testing now complete, the CAA has confirmed that there is no significant interference between 1090 MHz transmitting EC devices, such as SkyEcho, and non-ADS-B aircraft transponders.  The EC device ADS-B transmission prohibition is therefore lifted when used in conjunction with non-ADS-B (aka Extended Squitter or ES) enabled transponders.

uAvionix President, Christian Ramsey, said, “This pragmatic decision by the UK CAA is very welcome.  We have worked closely with the UK regulator in developing and testing this technology, and have adhered closely to the CAP 1391 standard because we believe ADS-B is the only truly credible solution for GA electronic conspicuity, as this gives the widest possible compatibility with commercial, military, and GA systems worldwide.  Now that pilots can use their SkyEcho to transmit as well as receive ADS-B, they are making themselves visible to the vast majority of other airspace users. Flight safety will be greatly enhanced as a result and the risk of collisions will be significantly reduced. The UK CAA is to be congratulated for taking a positive stance on EC and we hope that other European regulators will follow suit when they see the benefits and lack of negative impact in the UK”.